A popular Lawn Bowls Club existed within the Vale do Lobo resort complex for several years, but in March 2008 the resort management decided that the area where the club was situated would be more valuable to them as building land, and abruptly terminated the club's lease of the land.

This resulted in a very disgruntled group of frustrated bowlers, who formed an action group, under the chairmanship of Henry Parlour, to seek a new site for the club. Several months of discussions with the VdL resort management failed to find a suitable venue, and the group started to look elsewhere.

Late in 2008, we made contact with Jorge & Flor Paulo, owners of the Don Camillo restaurant just to the south of Almancil. The restaurant had some land at the rear for which Jorge & Flor had no plans, and they generously offered to let the group have the land for ten years for a nominal fee. The group members, however, would have to find the capital needed to construct a green and equip a new club.

We launched the "Founder Member" scheme, whereby anyone contributing to the costs of building the green would gain various benefits.

In spite of the financial storm which hit just at the time we launched this scheme, 80 thousand euros was contributed by a total of 25 individuals, and with an additional generous loan from Henry to underwrite the construction costs, we were able to give the constructors the go-ahead at the very end of 2008.

The green was laid over the winter period and by the spring it took its first bowl.

We decided to treat it very cautiously at first, so only used it for low-key club roll-ups from May through to August, and formally opened the club from 1st September 2009. With a nucleus of keen bowlers from the days of the Vale do Lobo club, and situated in a prime catchment area, the club membership soon topped 50, with many others participating in the club roll-up days on a casual basis.

The club already has a very busy programme, fielding two teams to compete in the Bowls Algare leagues, participating in many other inter-club competitions and friendly matches, and hosting a number of UK touring parties. The club also stages its own internal Club Championships and other special events, as well as holding three club roll-up days every week. Casual visitors are always welcome.

Or please use our 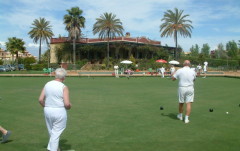